We’re getting a behind-the-scenes look at Janet Jackson’s major comeback!

The R&B superstar is giving fans an intimate glimpse into the new photo shoot for her highly anticipated (but still untitled) album.

Sporting a white dress shirt, distressed jeans, a ton of jewelry and some very big hair, the 49-year-old looks incredibly in a sneak peek photo from the shoot she shared on Twitter. No word on if this is the official artwork, but man, does she look stunning.

“Anytime that I get to work with Janet it’s an honor, it’s like reuniting with an old friend,” photographer YuTsai said of working with the star. “We’re back on set together again we’re doing our tango together again, I love it.”

In the feature, we see Janet’s team of photographers and stylists working hard on the unique look we see in the snap.

“We’re trying to bring together a whole conglomeration of different kinds of looks,” wardrobe stylist Kim Bowen says of Janet’s style. “It’s kind of funky, it’s a bit rock n roll, it’s kind of ethnic, maybe even a little bit punky here and there. And it’s kind of sexy and it’s quiet organic, a bit tribal. Janet always has a tribe going on.”

Watch the full video above to see Janet’s journey to her album cover!

Janet Jackson has unveiled the new music video for her newly remixed comback single “No Sleep” In keeping with the theme of the title, the video finds the singer and houseguest J. Cole walking around a beautiful, dimly lit pad after hours, singing their late-night anthem.

The video arrives just two days after Jackson dropped the J. Cole remix of “No Sleeep,” the first single off her upcoming, as-yet-untitled LP.

Janet Jackson has announced a second U.S. leg to her Unbreakable world tour, with the singer extending her first trek in four years well into 2016. After the first 39 dates North American leg of Jackson’s tour concludes November 12th in Honolulu, the singer will kick off 27 more Unbreakable shows two months later with a January 12th show in Portland, Oregon.

Like the first leg of the tour, fans who pre-order Jackson’s upcoming new album, her first LP since 2008’s Discipline, will receive special access to the second leg’s presale, which begins July 14th. Check out JanetJackson.com for more information regarding on-sale dates.

With just hours to go until Janet Jackson‘s new single ‘No Sleep’ is touted to land, it’s being reported that the dynamo diva is set to be the main attraction at next Sunday’s BET Awards.

It was widely believed that the superstar would be this year’s recipient of the Lifetime Achievement Award – however that honor is being bestowed on Smokey Robinson, it has been confirmed.

Still, Page Six are reporting that Ms. Jackson will be celebrated in some capacity at the June 28th extravaganza (which airs from L.A Live at the Nokia Theater)

***** A source exclusively revealed to Page Six that the “Rhythm Nation” singer will be honored at the event next Sunday.

The network’s been extremely tight-lipped about the production, but we hear Ciara will be one of the performers who will pay tribute to the reclusive pop star *****

“Janet’s known for her dancing, so expect a lot of dancing,” said the source. This will be Jackson’s first major television appearance in three years. She last appeared on the BET Awards show in 2009 to pay homage to brother Michael three days after his death.

If indeed true, it’ll serve as a potent platform for Jackson’s comeback campaign.

As reported she’ll be releasing her new studio album later this year via her own label Rhythm Nation Records in partnership with BMG. The set will be supported by a global trek, christened the ‘Unbreakable World Tour,’ tickets for which are being snapped up fast. 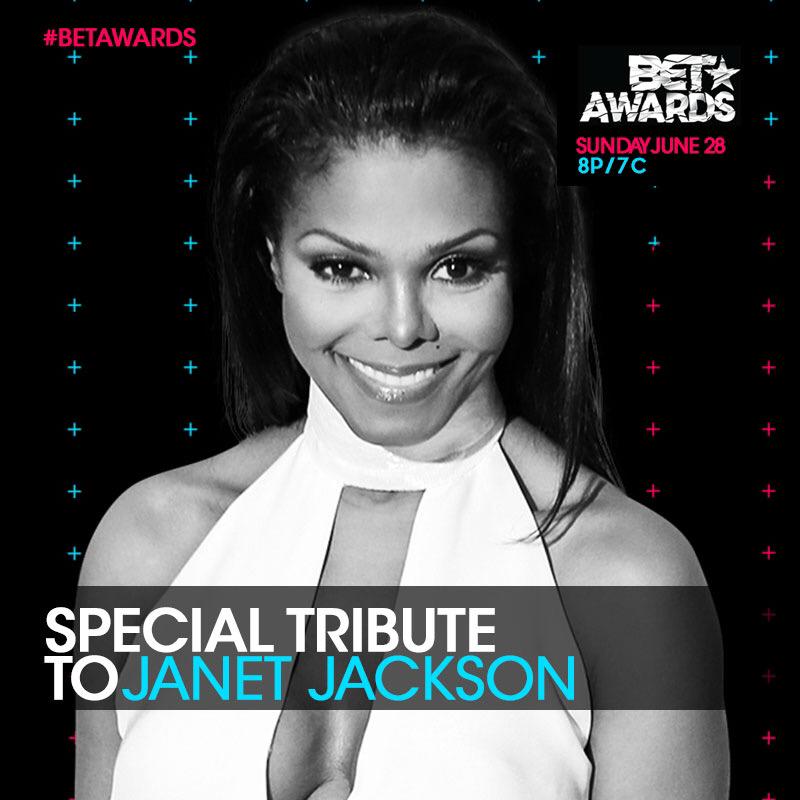 The steamy single (which takes us back to a “That’s The Way Love Goes” vibe) is dedicated to Janet’s husband and was produced by longtime producers and friends Jimmy Jam and Terry Lewis.

“No Sleeep” will be featured on Janet Jackson’s upcoming album, which is slated for a fall release and tentatively dubbed#ConversationsInACafe.  By the way….the record is coming out on her own label, Rhythm Nation Records.

In addition to the new single and album, Janet is trekking across the globe for a new tour, Unbreakable  as well. But in the meantime, listen to her new single here.

“To be dancing with Janet Jackson is life changing. It’s helped shape my mindset on life,

and my career. I’m beyond grateful.”

“It’s difficult to express in words how ecstatic and grateful I feel as I realize that I am going on a world tour with Janet Jackson. Dancing for Janet has always been my number one dream, and I am incredibly excited to embark on a journey with an icon who has inspired me so much as an artist. All this happening just makes me want to remind everyone in the world that absolutely no dream is too big. Believe in your dreams… they really do come true.”

“I am humbled beyond words to have the opportunity to dance with Janet Jackson on tour. I feel like I’m dreaming. Janet is an icon. An innovator. A revolutionary. She is a risk taker and a record breaker, and she changed the music industry forever. She is beautiful, powerful, brilliant and an exceptional artist. And on top of all that, she is an incredible human being, the kind of woman I aspire to be.  It is truly an honor to be a part of her legacy and be around her spirit. I have been dancing to her music since I was a little girl… I only wish my mom was still here with us to see it. This is my biggest dream come true and I am forever grateful.”

“I am truly blessed and honored to have this opportunity to work with Janet Jackson and I thank her and Gil for believing in me. The fact that I will dance and be mentored by an ICON not only as an Entertainer but as a Strong, Hard Working Black Woman is only going to inspire me to be that and better.”

“I always dreamed of dancing for Janet! Busting out in the “All For You” breakdown, touring, travelling, and ultimately living a life I loved. It took a lot of patience, sweat, hard work and tears. But I’m here and I’m ready to live the life I’ve always dreamed!”

“Dreaming of this moment as a kid seemed just that, a dream. It’s the craziest and most amazing feeling to now be able to say my dream has come true. Thank you so much to Janet and her team for giving me this opportunity and believing in me. I am so grateful…”

“When I was younger I would watch every Janet Jackson tour and almost every performance on repeat. Watching every move and memorizing the steps in my mirror. Dancing for Janet Jackson is more than just another dance job. It is THE job. To work for a woman who is passionate, hard working, and one of the greatest performers of generations past, present, and future is more than any dancer could ask for. Watching her dancers of the past and seeing how it’s made them the best of all time and how they’ve inspired me is something that makes my heart pound. Touring with her will change my life. The moment the lights turn on, the music starts, and the crowd screams will be implanted in my soul forever. All I can do is thank Janet, Gil, and her entire team to give me this opportunity to learn and grow not just as a dancer but also as an individual.”

“To have the opportunity to work with the biggest female icon in the music industry is the most amazing feeling in the world!

This is BEYOND my wildest dreams. Thank you to Janet and her team for this unreal opportunity! I am so so grateful!!”

“Touring with Janet is beyond anything that I could have imagined! She is the ultimate ICON and I still can’t believe that I have this opportunity to dance with her! This is the most amazing experience ever!!! I am so grateful and humble, thank you Janet for making all of my dreams come true!”

Beyonce took to her personal website to share this braless shot of herself posing in a pair of tiny hot pants and a flannel shirt which is strategically unbuttoned to highlight her body!

But this is a decoy look closer notice the notebook paper in the background of Beyonce’s picture!

That’s right looks like Bey is trying to tell us that she’s coming out with either a new song or a new album soon. Since posting this picture looks like she has taken it off of her website! Looks like it was posted today and taken off today!

The background of Bey’s picture looks like a ripoff of Janet Jackson’s new song to her fans! That she posted yesterday on all of her social media sites!

Janet Jackson: “I wanna tell you how important you are to me! Love J.” (new music) That Janet posted yesterday on all her social media accounts. Watch the video below!

Janet Jackson secretly started auditioning for dancers for her Unbreakable World Tour over 2 months ago! She started recruiting from overseas and now the callbacks and the USA auditions were held two weeks ago in Los Angeles.
Sorry guys the reason that I couldn’t get the scoop on this audition was because Janet Jackson knows how to keep her business privately.
If I hear any more info on more dance auditions for this tour I will let you know!

Janet Jackson will be back soon! Are You Ready? I Am!